>You’ll listen to some of the comments with a feeling of disbelief.

<!– @page { margin: 2cm } P { margin-bottom: 0.21cm } I have been meaning to finish this for as long as I have needed a haircut. Well I have done both now. No real reason for having not either. I have busied myself with various studies, focussing my reading and education while trying to fit in some photography and exercise but there should always be time for this.

Firstly I need to thank the Germans for their simplicity, honesty, straight-forwardness and paying my credit card bill. Getting a refund in the UK involved tortuous phone calls, letter writing and the ubiquitous £10 administration fee. Essentially a charge to do their right thing but that apparently isn’t their job. They have red tape to follow, a beautiful bureaucracy which they complain hinders their business on the one hand but of which they abuse with malevolent glee when convenient.

But not our German brothers. One call, one letter and they have refunded the ticket price and with the bonus of shifting exchanges rates, I have actually made about 10 euros. Das ist gut, nein?

So what have I been doing? Spending money to put it succinctly. Two weekends in a row I got down to Krakow, the second city of Poland and its university heart. The city survived the war fairly intact even as a large percentage of its population was sent to the nearby Auschwitz. The centre radiates charm and bohemian sophistication. Backstreet bars are full of young , hippily-dressed students, knocking back drinks over conversations full of political thought and artistic vibes. It’s a city to hang out in and far superior to the pretentious, ugly and vacant Warsaw. 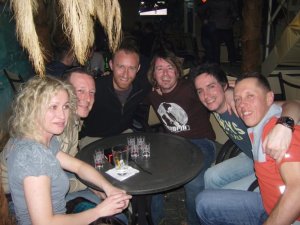 The first weekend involved a reunion of some of the boys. Joe flew in from Dublin while Tom along with Russ was in Europe for a month and came up from Budapest. It was a fairly simple weekend, involving copious amounts of vodka, bought in the wrong bars. No surprise there. It was good to see the boys though. Hadn’t seen Tom since I managed to crawl out of his apartment in Bangkok and get the flight to Paris in August after a marathon session and some hooker karaoke. The absence of Joe, while always online to discuss the unfolding disaster of Newcastle United goes back to him coming over for a game in London in Dec 2006. Good to see the boys.

Linden came over from Berlin the weekend after. We met in Warsaw and proceeded to eat Polish food, sort out the world of relationships and human psychology and drink a bottle of Zubrowska vodka far too quickly. Linden is a trooper though and held up her end up. Eventually we ended up in a talky bar with an American and Turk we met in the hostel. They had a 7am flight and were doing the right thing; drinking through the night and talking with us.

We caught a train to Krakow the next day. The yappy dog in our cabin, reminiscent of a rat on a string, abetted by my hangover drove me to murderous thoughts. We hid out in the buffet for the rest of the trip. Our hostel in Krakow was a cracker. While seemingly quiet, the pace picked up every evening as a Dutch guy, Aussie, two Germans and a hippy American gravitated towards our drinking habits and we shared our vodka with them. We spent our days checking out the cultural home of Poland, alive during the day with Easter which is taken very seriously in Poland. The staff at the hostel enjoyed our attitude and took us to various cool little bars run by friends and open until the dawn hours.


After a relatively lifetime of 4 days there, I returned north to Warsaw and Linden took the direct train back to Berlin. I have yet to make my mind up about Linden. A top girl indeed, full of vigour, knowledge, quirkiness and long words, we have become firm friends. She challenges me with her extensive vocabulary and references to higher culture. No average American girl indeed.

And now I am back here on a Friday afternoon, sitting in a cafe with terrible music and more staff than customers. The job is going fine but I am counting down weeks now. When you have to leave a city to find good music, bohemian hustle and inventiveness, its not a place for Danny Boy.

Poland has been very good for and to me. I needed to get away from the UK with its mourning of TV morons and its media which switches between fear and negativity like the metronome the Ting Tings use for music. The staff at work are amazed by my reading of Polish history and while my fluency in the language necessitates I flee the neighbours, I have managed to explore what makes the Poles tick. Perfectly suited to my planned, future anthropology studies.

The summer looks enticing. The options around here from Salzburg to St Peterburg give me the jitters. Colombian Gabriel is meeting me in Helsinki. Kaz will be along soon after and we’re all off through the Baltics to rest at the Heineken Opener Festival in Gdansk to see the Kings and the Arctic Monkeys. (£20 ain’t too bad eh!)

I should thank James, my old buddy for reminding me to get this up on the blog. I’ll get some more thoughtful stuff up soon! Look forward to a meet in the autumn man.

I don’t understand the rules so it seems ridiculous to me. Who knows?

Have a click on the map for details or the title for the article.

You gotta smile
Create a free website or blog at WordPress.com.