I just awoke from an afternoon nap. I needed it. I’d spent the morning reading about the Balkans and Latino migrant workers in the UK. That material sends you to sleep. So I did for an hour. I woke up with vivid memories of being in a bar or restaurant, behind the scenes but not working there. Former friends did though. I say former because these were all people I’m no longer in contact with for various reasons. Almost actively so. We’ve just forgotten each other. We smiled at each other but made no effort beyond that. Sad how that happens. Probably natural but in a time of easy communication, it seems confusing. Almost embarrassed to start a conversation. 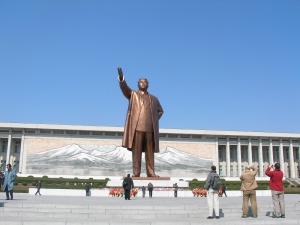 Sitting in out flat in Seoul, we were bored. We’d hiked the mountains, waddled along the beaches and drunk ourselves stupid on too many occasions. ‘We could go to North Korea.‘ I paused, mulled over whether to give my money to such a government. But I felt I needed to see it.

Koryo Travel run from Beijing by two English guys have been running tailored tours for 20 years. If you have ever seen a film about the Mass Games, the North Korean football team in 1966 or the 4 US soldiers who went AWOL, they made them too. I wasn’t comfortable taking a tour but turn up,as a solo backpacker, expecting to tramp around and you’ll get 10 years.

A mixed-nationalist group of 17 flew from Beijing to Pyongyang. The plane was so old it barely got off the runway. Next to me was a North Korean school girl vomiting into her sick bag. I gave her mine as well. She took it, acknowledged it with a thankful nod but never looked at me. She also filled it.

Once into Pyongyang, the true surreality began with the 1000 stories we heard or witnessed. At first, we wondered if we’re meant to take them seriously. Soon we simply gave smiling nods to all the wondrous news we were told. The hotel is unfortunately not the magnificent and still uncompleted Ryugyong Hotel but a French built one on the island in the river. A hotel the North Korean government then refused to pay for and threw the French out.

If you ever wondered where North Korea get its money from, then the list is notorious. They’re the biggest producers of amphetamines and fake US dollars in Asia, helped train Zimbabwe’s special forces and regularly threaten to build more nuclear bombs unless they get help. It’s a simple game of brinkmanship but with the tacit backing of China and reluctance of South Korea and the US, it has consistently worked. So far.

We visited the farm with the radio you can turn down but not off. It looked a very orderly farm if rather deserted of people and crops. The State Circus was fun, the Children’s Theatre was 2 hours of traditional Korean music (imagine Team America) while library, supermarket and DMZ border were more difficult to cover up. They were shell-like buildings, cold and vacant.

The trip to the school was the most surreal moment. In the computer room, the kids were busy doing various different tasks. I watched one kid from a distance. He was inputting 10 or so numbers into an Excel spreadsheet and once finished, he simply deleted the numbers and started again. This school was a sham, prepared on Wednesday afternoon for the tourists.

We bowed at various monuments and murals dedicated to Kim Il Sun (The Great Leader) and his playboy son Kim Jong Il (The Dear Leader). Our guides pointed out that one huge statue of The Great Leader used to be all gold. When the North Koreans tried to play off the Soviet and Chinese government for aid, the Soviets took a different tact. Pointing at the glimmering statute, they merely suggested North Korea melts that down. It’s now copper!

Once you get out of Pyongyang, the true picture emerges. The country is desolate, brown and worn. The soldiers are not the impressive 6-footers you see at the DMZ border with South Korea. Rather they are boys with country tans and sleeves that cover their hands. You lie down and sleep in the middle of the highway. There’s s no traffic for all you can see.

The only sinister note we experienced (apart from eating dog one night!) occurred in the East coast town of Wonsan. The park was full of locals enjoying soju, the local Korean firewater and dancing in a circle. We joined them, only for the party to be quickly broken up by state agents. Later we witnessed a small car accident and the state security came to our hotel to check our digital cameras. Bad news isn’t to get out.

On the last evening before the train ride back to Beijing, there was the large dance in honour of Kim Il Sung’s birthday. We observed for a while before being dragged in there by our guides to join the party. Later we sang karaoke and drank whiskey with the guides. I asked the male guide if he really believed the stories he told us. ‘Yes;, he replied. ‘So Kim Jong Il’s so good at golf he once scored 36?’ ‘Of course,‘ he smiled but I swear that smile said all I needed to know.

Here is a link to an article on The Economist website, a piece that is disturbing and harrowing and becomes difficult to read at times but it should be read.

16.  LCD Soundsystem – This Is Happening

7.  The Tallest Man on Earth – The Wild Hunt

4.  Laura Marling – I Speak Because I Can

“I don’t see a story unfolding with bands because it is gap year music. It seems like somebody has said, ‘I think I’ll do an album then my dad will give me a job in the accountancy firm’,” he commented.- James Dean Bradfield of the Manic Street Preachers.

Couldn’t agree more. I have argued this for a while. A lot of bands have only one album and a lot of influences. One album in them simply because they have no story to tell. But they are literate after a nice education at a public school, their patents paid for piano lessons but they wanted guitar or drum lessons to impress the girls. Maybe that’s why a lot of the better bands right now contain more than the historical average of women.

So with their nice childhoods, they can knock-out one album before they run out of ideas and there is always maybe DJing, or being a party planner before moving into ‘serious life’. Its a shame but you can see it in many bands from The Libertines to The Editors. Simply not that good. Not enough depth or history to them. No Johnny Cash. No Matt Berninger. No Dave Berman.